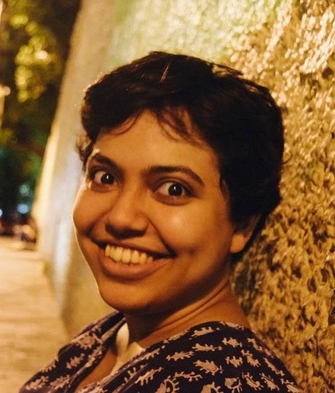 Debleena is a Kolkata based theatre director and playwright. She enjoys making performances collaboratively with different groups and communities. With each performance, she strives to connect to more people and tries to facilitate the creation of a more tolerant world around.

Debleena has 2 years of post-graduate teaching experience as a part-time lecturer at the Department of Drama, Rabindra Bharati University, Kolkata. She has worked as a drama teacher in several Kolkata schools and conducted theatre workshops for children and adult amateurs in Kolkata since 2010. She specializes in using theatre techniques in training and awareness programmes and has worked with varied communities including medical teachers at private universities, women in interior villages of West Bengal and economically underprivileged children in urban fringes of Kolkata.

Janla Khola Achhe, a book of plays in Bangla, published by Soi, Kolkata, 2018.

“The Little Heroes” in the print book Heroes Anywhere and Forever: From a German, Indian and American Perspective, edited by Sieghild Bogumil-Notz, published by Berlin Ch. A. Bachmann Verlag in 2015. Print. English.

“Chetana”, an online module on the Kolkata theatre group at Sahapedia, 2018.

National Young Artistes Scholarship in the field of Theatre by the Ministry of Culture, Government of India, 2011-13