Free event. All are welcome! No RSVP required

How do theatre and performance studies scholars think about the Pacific Ocean world? For millennia, the Pacific Ocean has been a matrix of indigenous interchange, and since European encounter in the sixteenth century it has served as a nexus of commercial, military, and scientific relations that have always been important in world terms. Yet, often this area of the world is considered a remote and vacant space, an expanse to traverse, and a region beyond intellectual and pedagogical regimes of intelligibility, disavowing the complexities of its vast and heterogeneous island domain. In this talk, I advance a transpasifika viewpoint, which drives forward theories of interculturalism in performance through attention to the Pacific’s unique cultural and geographic dynamics, as well as reworking the cartographic and disciplinary priorities of transpacific studies to privilege the activities of Islander peoples. I explore it in relation to two case studies: a historical, indigenous performance from the Tuamotu Archipelago in French Polynesia that entwines pan-Polynesian sources as well as various trans-indigenous and imported influences stimulated by the international trade routes of the pearling industry; and a contemporary performance about the blended British/Tahitian genealogy of the Norfolk Island community in the south-western Pacific, read in the context of the Islanders’ contested relationship with Australia. On their own and together, these works teach us about some of the surprisingly extensive intercultural linkages that frequently characterize small island communities and that involve them in significant processes of world-making and modernity. 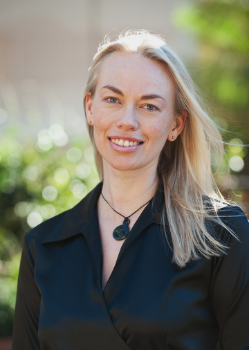 Diana Looser is from Aotearoa New Zealand and is based in the Department of Theater & Performance Studies at Stanford University. Her research interests include historiographic, ethnographic, and cross-cultural approaches to performance, Pacific Islands studies, and transpacific studies. Her first book, Remaking Pacific Pasts: History, Memory, and Identity in Contemporary Theater from Oceania (University of Hawai‘i Press, 2014) received the Rob Jordan Prize from the Australasian Association for Theatre, Drama, and Performance Studies. Her current book project, Moving Islands: Contemporary Performance and the Global Pacific, examines the wide-ranging connections forged by artistic performances from Oceania in the first two decades of the twenty-first century. It situates the Pacific Islands as integral aspects of and alternatives to larger world systems at a time when we are witnessing a shift from the north Atlantic to the western Pacific as the locus of global cultural and financial power, and examines how performance functions as a means for people from the region to navigate the environmental, economic, and military exigencies of the contemporary moment. Diana is also at work on a new project that explores the ethnographic and artistic interface between western and indigenous representations of Oceania in the eighteenth and nineteenth centuries.