Snezana Pesic, faculty member and curator of the Canadian National Exhibition at the Prague Quadrennial 2019, takes CDTPS students to this international festival of theatre and design

The CDTPS is thrilled to have its design students attend this year’s Prague Quadrennial (PQ) under the experienced leadership of CDTPS faculty member Snezana Pesic. PQ takes place every four years, and brings together an international community of directors, artists, scenographers, students and visitors from around the world for 11 days, from June 6 to 16, 2019. There are 800 artists from 79 countries and over 600 performances, workshops and lectures. PQ is the largest international festival of theatre and stage design in the world. Snezana Pesic is the curator for the Canadian National Exhibition at the PQ event and will be taking five of her CDTPS design students with her to exhibit their work at the Student Exhibition.

“PQ is the most important event in the area of performance design and space,” said Pesic. “It is also a conference and festival that includes live performances, lectures, workshops and talks by leading artists in the theatre and performance world.”

There are three thematic areas interwoven throughout the entire PQ program: Imagination, Transformation, and Memory. PQ presents three major exhibition sections: the Exhibition of Countries and Regions, the Student Exhibition, and Fragments, an exhibition dedicated to living legends of the design for stage. The Student Exhibition falls under the theme of imagination and will be an opportunity for students, young designers and young design studios to present their work. There are 55 schools involved internationally and the CDTPS is proud to be one of them.

“Our students will be exposed to many different approaches to creation in our art form on an international level,” said Pesic. “It is important for them to actively participate, not only to gain experience and create bonds with other students and professionals, but to understand where they stand within this abundance of diverse approaches to performance design and how they see their practice in the future.”

Besides involvement with the Student Exhibition, CDTPS design student Abigail Esteireiro will be presenting digitally her work as part of the PQ Studio: Common Design Project. This year’s designs all revolve around the play, Ubu Roi by Alfred Jarry. 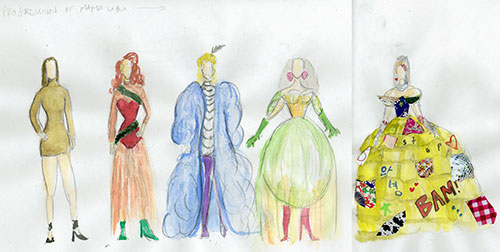 As curator for the Canadian national exhibition and member of the Associated Designers of Canada, Pesic has developed the concept for the exhibition and designed four displays that represent the work of 12 renowned designers from across Canada. The national exhibit is called Individuality and Interconnection and explores the relationship between a designer’s individuality and the collaborative nature of their work. Pesic’s primary focus as curator is to showcase Canada as a modern and powerful force in the area of performance design.

Following the PQ event, Pesic will travel to another international exhibition in Moscow, Russia. The event titled, Innovative Costume of the 21st Century: The Next Generation, is a major exhibition devoted to costume designers who began their career in the 21st century. This event had over 1,300 submissions from 938 designers across 60 nations. The curators narrowed the submissions down to 250 finalists, including Pesic’s designs, which will be on display in Russia.

“The exhibition of innovative costume design is a unique event that focuses on costume designers of a new generation and on modern approaches to costuming for the stage,” said Pesic. “Besides the fact that I will present my drawings and designs to a larger international audience, the exhibition is another chance to investigate and analyse new shapes that the costume design form took from the year 2000 onward.”

This exhibition will be hosted by the A.A. Bakhrushin State Central Theatre Museum and will take place at the State Historical Museum from June 4 to August 31, 2019.